Wow, time has flown by. I have been busy, busy, busy. My mother-in-law came from Georgia to visit for almost two weeks, and Erin, consequently, turned us on our heads. It was a great visit, but the person/thing that profited most from the visit was definitely Flash. He’s currently suffering from PTSD, however, he had a bit of a reprieve given that Grandma Vicki brought two furry little Shih-tzu puppies with her : Hannah and Sadie. They might be able to get a discount on group therapy, if it weren’t for the fact they live 11 hours away from each other. Misery loves company. Oh well. Anyway, Grandma Vicki slept in Erin’s bed, which was perfectly fine since she vacates her bed every night to form the letter H formation between her father and I in our bed. The draw of the puppies was too great, though, and she spent many a night in her sleeping bag, hunkered down on the floor next to Grandma Vicki, right where the puppies slept.

Here is a pic of the happy camper. (Singlular, not plural.)

I called the puppies for a comment, but they are still working through their own PTSD issues.

Then there were nights like this, when she refused to sleep anywhere, so we had to put the gate up in our bedroom to keep her in there.

She’s picketing. On the floor in front of Rudy’s crate. She’s smart as shit. Plus, she got caught 1) not being in bed like we asked and, 2) enjoying herself reading books. Double whammy.

Ok, so her sleeping situation became a bit unglued, no fault to anyone, it’s just that there was too much excitement with Grandma here! She did manage to bust out gymnastics in her usual fashion. The usual fashion being, a giant smile, stories for her teacher about how her Mom with one leg cannot do cartwheels (oh, but I can! And my husband told me to stop because I was going to hurt myself…..), picking her wedge gratuitously every 5 minutes, and the best of all – Honey Badger Jumping Jacks. Oh God, they are THE BEST.

Most kids get a stamp on their hands after class. Erin sticks her foot out and makes them stamp her foot.

We had a super time with Grandma Vicki!! Grandma Vicki is super organized, on time, and totally on top of everything. She was a part of our chaos for just enough time to spur her to get the hell out of dodge back to her organized, clean and on time lifestyle.

So, here we are and we’re getting back into our routine. I thought we did pretty well for a Monday morning yesterday. As usual, Erin and I were about 10 minutes late to school. Today was an entirely different story. I spent 45 minutes trying to wake her up, while I rushed around and got ready. Nope. Shirtless in my bed, she snoozed comfortably while I finally decided we weren’t making it there today. I had a Dr’s appt at 10:20am, and I’m trying to get her dressed 15 minutes before we absolutely have to walk out the door.

Me: “Erin, you need to get dressed RIGHT NOW.”

Me: “Are you saying blanket, or bacon? We don’t have any bacon, but you can bring your blanket.”

Me: “Come onnnnnn. I need you to get dressed. Santa Clause is watching you!”

Ok, this was almost as much fun as last week, when she did the same thing, but the super cool word was : “Daddy”. Same exact scenario, different key word. Also, this went on much longer than you see here, which is sad. I just argued with a complete crazy person who repeatedly said the word “Bacon” in response to my begging and pleading.

I have lost all threatening power with regards to Santa. She doesn’t flinch. I have no leverage. I’m over Christmas. What good is it if you can’t use it to threaten your children?

It doesn’t matter anyway, because Erin summed it up tonight to Dylan. “I don’t really like Christmas. I like Halloween much more better.”

Listen, I only take orders. One of my bosses is The Honey Badger. And, when she wants bacon, well…she’s not joking around. 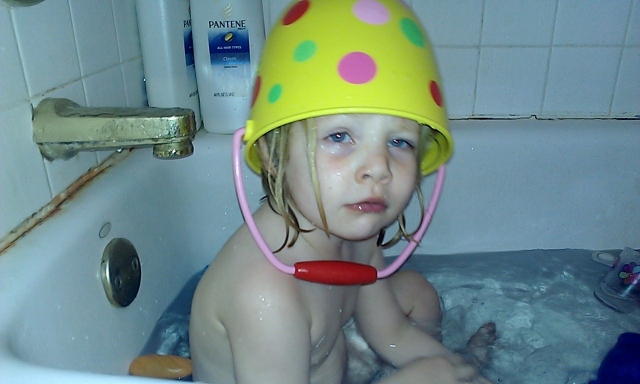 Does she look like she’s kidding? “ARE YOU GOING TO GET THE GOODS, OR NOT? STOP MESSING AROUND.”

So, I set off on a mission today. Retrieve bacon for the badger….among other things. I was desperate to get out of the house, anyway. I have been cooped up here for two days with a child that was possibly feigning illness to stay home, and the one pictured above. Ok, ok, Dylan was not actually feigning illness. He had really swollen tonsils, a fever, and is quite bored to tears now, and is ready to get back to school tomorrow. Usually, I despise going to the grocery, but my husband doesn’t mind one bit. Today, I was absolutely THRILLED to go myself! I had a ton of coupons; one of them was – free bacon! Who gives away free bacon??? You have to be on your game, but it can be done.

Proof.  I speak the troof.

It’s been a rough week. I redeemed myself by saving over $90 bucks at the grocery. I would like to think I could do this every week, but I think it’s absurd  to even tease the idea that this might become a regular occurrence. Too…..much…..work. Too much organization, prep, execution…not to mention, embarrassing yourself while standing at the cash register with a mountain of coupons while everyone else is pissed off that they ended up in your line. (Alright, let’s be honest, this last one doesn’t really bother me. It takes a lot to embarrass me, and this is not one of them.)

What it all comes down to is this: “SNACKS”.  Be it bacon, or vegetables, or fruit, or carbs, I don’t go more than a millisecond without hearing the words, “I wanna snack!!”. I absolutely loathe the word “snack”. It’s one of those words that just…strikes a chord. I just got a chill even thinking about it. Usually, I hear it in a slow, animated motion, “I WAAAAAANNNNA SNAAAAAAAAACK.” So simple, yet so LOADED. You offer up several different suggestions, all turned down. It’s a true testament to will power to give something healthy, but not redundant….lest they lose their healthy-ability (new word, just made up.)

Speaking of snacks, the  Honey Badger was also enjoying a “snack” while her Daddy read her a bedtime story.

Sean starts to read the book and Erin says, “HOLD ON, SISTA!” as she quickly indulges her snack. When she was done, she acknowledged that she was indeed finished, and ready to move on with the story.

It’s hard out there for a honey badger.